I’ve recently taught at a class, been on a panel, and have more panels and classes coming in the next few weeks. So, I wanted to make sure there was something somewhat fresh here on the front page.
If you’d like to read a few articles I’ve written,

are both good ones.

This is my personal blog. If you want to know more about what I’m thinking in Business, you can read the Harbrooke Group Blog. You can also check my column at Inc. Magazine’s Inc.com Startup Toolkit Blog. There’s a link on the right side of this to my Facebook Fan page where I link to many of the articles I write. There’s also a link to my upcoming classes at Learning Annex and NYU.

Yesterday I had the privilege of moderating a panel about Social Networks for ICT (Information and Communication Technologies) Entrepreneurs at the UN GAID “UN meets Web 2.0″ event.
The real UN, in NYC: 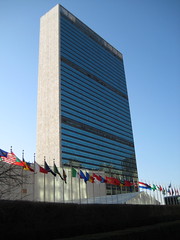 (as opposed to the model U.N. conferences I used to participate in back in High School.)

We covered a large amount of ground in just one hour, and as moderator I wasn’t exactly taking notes to blog with, but I did learn a few things to share.

Marnie works at Tech Soup, which offers nonprofits a one-stop resource for technology needs by providing free information, resources, and support. It’s so much more than that, go check the site. One of her big projects currently is the net squared mashup challenge. Marnie noted during the panel that they let the “community” (meaning anyone interested) vote for their favorite projects, which will be reviewed at a conference. While some of the contenders might not have been what her team might have picked, she felt the community did a great job in surfacing interesting projects.
The benefit to groups submitting to the challenge was that all submissions were public, and that allowed any smart people to comment on them and potentially improve the submissions before the deadline.
The entire project is a great example of the ‘Wisdom of Crowds‘ that is often referenced around web 2.0 efforts.

Aaron was involved in another community-built effort, the book We are Smarter than Me. This book was written using a wiki to source comments and ideas from anyone on the internet who choose to share and contribute. (Disclosure, I participated in the Wiki a few times, and am credited in the book, but don’t have any significant role in it).

Jordi gave me 2 really great things to think about. First, his group, iWith.org has partnered with AlternativeChannel.tv to host video content for not-for-profits looking to share their video and use something other than You-Tube. Looking at the site, I also note that: Alternative Channel in collaboration with iWith.org in Barcelona organize the Alternative Channel Forum on Social networks and responsible media.. The event is scheduled for April 30, 2008. Read it for more.

Jordi noted that iWith.org had originally offered a bunch of software-as-a-service hosting for not-for-profits, but that when they gave the service away, many groups didn’t make much use of it. Now they charge Euro40/month, but offer grants and discounts to organizations who need them. I love this lesson – if it costs something, it counts and groups will use it. This is the same reason I often have charged $5 or $10 to attend an event like Social Media Club in NY – it’s enough money that people have to think about attending, but not enough to keep people away.

Jordi also had an insight that (and I quote):

NPFs have been leading social movements in 20th century. From charity, to political parties, and labor unions, most of the volunteering from these causes was young people, mainly students that participate with their free time in the cause of their choice. But in 21st century, younger people are spending more and more time online, and the net offers volunteering opportunities, from co-creating an online encyclopedia, to develop an operating system. That is happening while traditional NPOs are becoming more professional, structured, big and “like a job”… [Jordi is] seeing more virtual and less structured groups – those organizations that once lead social volunteering in the 20th century are losing resources to online groups – they must use and participate online in groups or lose attention and fundraising resources – as their volunteers move to other interests online.

It makes sense to me that organizations have to allow the youthful volunteers –who are often the backbone of groups — the freedom to connect with each other and with the organizations online, and become infrastructure for the cause and be a connection point.

My’s project with IBM and the World Bank created a toolkit for small businesses. The site has resources, forms, and content, can be found at http://www.smetoolkit.org/smetoolkit/en . Definitely worth a look!

An audience question asked about deploying social networks, and noted how in the traditional tech model, companies had Integrated Systems Vendors (ISVs) who would deploy hardware and help small to mid-sized businesses who needed coordination and might not have IT staff. What’s the equivalent to an ISV in social media? This ended up being a soft-ball question for me, and I replied that this is part of the role that my company is playing. Many fimrs will deploy a software-as-a-service social network, but not have the strategy abiliites in-house to make a community grow. My consultancy focuses on this strategy component, and I work with other consultants and have relationships with multiple vendors. (end of commercial).

There were lots of other panels, and I will blog about them in the near future. I look forward to questions and comments from attendees and others, and thank UN-GAID and Gary Bolles for this unique opportunity to contribute.

I’m getting excited about the UN meets Web 2.0 event in NYC next week, where I’m moderating the panel on Social Networks.

In researching the panelists, I found this video about Marnie Webb, Co-CEO of Tech Soup, and what her organization does.

Paul Gillin has a great summary of what many geeks have been discussing all week, and which mainstream media has not really commented on – the shift of power at conferences and events continues to move to the audience. Paul writes about the keynote at the South By South West (SXSW) conference last week, in his newsletter (worth reading every week, posted online here):

The highlight was the keynote interview with Facebook CEO Mark Zuckerberg by BusinessWeek’s Sarah Lacy. Evidently, a lot of people in the audience didn’t much care for Lacy’s rather interruptive questioning style or her cozy familiarity with the subject. They were also put off by her failure to involve the audience more directly in the line of questioning. So they started Twittering about it. And as the interview went on, the comments passed between attendees took on a life of their own. By the 50-minute mark, the emboldened audience was actively heckling the moderator. Lacy was a bit flustered, but she finished the interview. When she walked out of the auditorium a short time later, bloggers armed with a video cameras were there to record her reaction to the audience’s behavior.

One of Paul’s points is that the audience is difficult to engage in conferences, often ignoring feedback forms and requests for comments. But systems like Twitter allow feedback in a completely different way. I’ve been at events where a ‘back channel’ chat was posted behind the speakers, but it is really tough for a speaker or moderator to react to it. A third person has to act as the ‘greek chorus’ of the audience and pass along the zeitgeist.

As someone who frequently moderates panels at Social Media Club and NYSIA, as well as elsewhere (at the UN next week – see the right side of the blog for upcoming speaking engagements) I’m getting a bit paranoid that I need to have Twitter up and running during my panels. Another technique, and one I like to use, is to shift the power to the audience as early as possible, but not having too many ‘panel’ questions, and ensuring the audience feels heard. A more radical vision of this is the Barcamp/Podcamp/&amp;lt;Insert name of your UnConference here&amp;gt; where the audience makes and contributes to the content. When I started participating in these types of events a few years ago, many events people thought I was crazy to like them. Unstructured content, the audience is in charge, no cost? But they work. I was at a session at a very important business council last week, and the first session before structured speakers was a “1 hour feedback and ask for what you need” discussion. I believe the group would have gone 3 hours giving each other answers if the moderator hadn’t stopped them. The participants wanted to tap into the wisdom of their crowd – their peers at other companies. There are many moderating techniques such as Open Space, World Cafe and more that preceed and portend this conference trend.

How can conference organizers tap this trend, while still doing business and making money? I’ve learned from my friend Jerry Michalski that the most interesting stuff happens in the hallways at conferences, and that you can design an event around that kind of interaction and not have panels. It can be tough, but the relationship building and knowledge are top rate. How does Twitter and other connectedness and presence tech help? They provide a feedback mechanism and a communication channel that may not be evident, but it is what the attendees are feeling.

Last night at the Business of APIs conference, we were discussing the Sarah Lacy incident, and Jeremiah Owyang asked us to pick “Mob Justice or Mob Rule” to describe the incident. I wasn’t at SXSW but watched the session, and I’m guessing this was a bit of an overreaction, but was Mob Justice – the audience wasn’t getting what they had paid for.
There’s more to think about on this, but I have to run to a meeting. Please add or comment below.

Last night, I was privileged to host the NYSIA event at Chase. Henry is currently the co-founder and Editor of the Silicon Alley Insider.

This video clip courtesy of Michael Pinto of Very Memorable who has kindly showed me that I say “um” a bit too much. Something to, um, work on.

More coverage and video via Center Networks
NYSIA February Meeting Recap – Discussion With Howard Greenstein and Henry Blodget
and thanks to Allen Stern for posting it so quickly.

Pictures and video on Facebook:  NYSIA State of the Industry.