In what has become something of a trend after my UN meeting last month, another friend invited me to meet with a world leader to discuss Social Media. (That actually sounds more formal than the dinner last night actually was.) 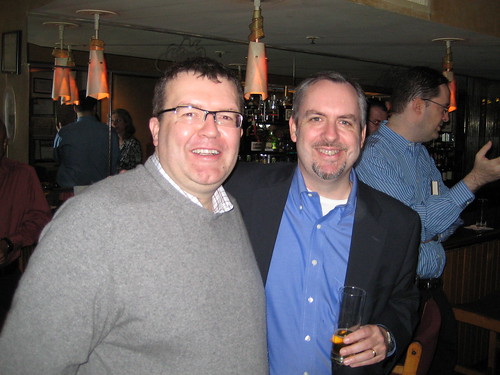 My US friend Tom Watson of Changing our World and On Philanthropy invited Pamela and I to join a group of friends to meet MP Tom Watson, Cabinet Office Minister from the UK.
MP Watson’s office recently released a report on the Power of Information, documented here in his blog.

Five years ago, I set up political blog. At the time, it was seen as a radical act…People couldn’t believe that I had opened myself up to such scrutiny and occasional daily abuse.But the blog broke down the walls between legislators and electors in a way that interested me. So I persevered.

He’s also got a LastFM badge. This is a real blogger. A gentleman at dinner asked him what he looked at first as far as websites and email, and he started quoting LifeHacker and GTD and how he manages his information flow. This already is different from almost any American Politican I’ve met at any level. He also was impressed I had gone to ITP, since he’s a fan of Clay Shirky.

It is clear that Tom is passionate about helping people get a handle on their information. From the aforementioned blog link:

Today I am going to offer two arguments that I think compliment the Prime Minister’s recent announcement on public service reform.

Firstly, that freeing up data will allow us to unlock the talent British entrepreneurs. And secondly, engaging people – using the simple tools that bring them together – will allow the talents of all our people to be applied to the provision of public services.

The dinner was held under Chatham House Rules, which allows the participants to use the information they gathered, but not to attribute the identity or affiliation of the speakers. So, I can’t really go into depth on the discussions. However, it is clear to me that MP Tom Watson will be helping to open up the UK Government in a way that may prove quite beneficial to the citizens of the UK and be a model for us here in ‘the colonies.’

Tom will be in SF for the Web 2.0 Expo, and I’m hoping to get him together with a few of my friends who will be there. If you’re interesed, please get in touch with me.