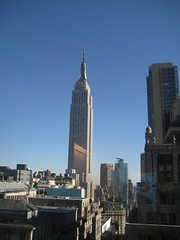 Gerry Cohen of Information Builders hosted a lunch today for NYSIA members with Congressman Anthony D. Weiner of Queens and Brooklyn. Weiner, a former aide to Senator Schumer, one of the youngest men to ever serve in the NY City Council, and a Congressman, was a mayoral candidate in the last NYC election.

Hosted by and Intro by Gerry Cohen, CEO, Information Builders.
Gerry noted the number of workers, by sector, in NYC. Information Tech is quite a large sector, on par with Private (not NYC School teacher) education.

Bruce Bernstein of NYSIA introduced Congressman Weiner. The congressman was there to hear from the IT sector, and to lay out some of the things he’s thinking about. I took some rough notes below. Overall impression – he came across very smart, very confident, and also relaxed. He understood IT issues, especially Net Neutrality, much better than most politicians I’ve heard from. I enjoyed the session and hope to hear more from Congressman Weiner, who someone attending described as the democratic front-runner for mayor… 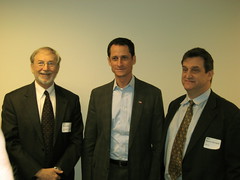 Congressman Weiner said:
NYSIA – good organization for the DNA of NYC – connects the creative types and tech types in NYC as a Social Network.

Locally: Businesses of a certain size (smaller than JP Morgan) face very high costs to locate in NYC. If you’re Google, NYC will make things very hospitable for you.
If you’re a 2nd tier employer – 20-50 people, etc, the city can’t do much for you on a tax level or an economic development level.
We compete for people who want to be in a creative center. But, Jersey City and Westchester is ‘close enough’ for many people.
Has a plan for not charging taxes, payroll tax benefit, back to people who are creating new jobs.
City needs ability for small businesses to band together for a health care plan or facilitate businesses to get plans with consortiums, we should be able to do better – we have so many facilities.

Make sure businesses in high tech community have infrastructure to do businesses they wish to do – they must look for space, other resources.

We have so much of city based on the Financial Svcs industry – too fragile to keep all our eggs in a basket. If bonus time is bad it will impact the city housing market.

We’re going to need a costly employer incentive program, but it will help and create a multiplier effect.

At federal level, needs to be decision about how these kinds of companies can stay in the US.

Net Neutrality debate in many of his committees. Next test will be to ensure that everyone has access to people’s homes and businesses.
NN has posits on both sides that gov’t should hands-off or hands-on.
Supports Net Neutrality protection – creating a template where best ideas can get to consumers quickly, the only way is to ensure people have unfettered access at work or at home.

Ultimately the cable and phone co’s aren’t going to be the most creative folks in the market – protecting NN will be a longer term battle – but Congress should ensure winners and losers can’t be picked in advance.

International / Domestic – immigration discussions. From a legislative debate perspective, it shows the shortcoming of democracies – it requires more nuance than the media seems to allow.

Immigration is becoming irrelevant as people can stay where they are and still work for us. But as residents of NYC, that can hurt us (as they make lower salaries).
No industry is more imperiled by crackdown on immigration than the Tech industry.

When immigration catches cold, NYC gets pneumonia. Also true of education – we can’t be a place where anyone with social mobility leaves the public school systems.

NY is having a good time with tourism these days because the dollar is basically worth “crap.” Frankly travel isn’t easy these days at all. Government has substituted actions for results – you could make a shirt collar bomb instead of a shoe bomb, but we still make everyone take off their shoes.

Downside of the republic is disincentive to invest in long term infrastructure. The fact that congress is reelected every 2 years – we have no incentive to do long term plans.

Infrastructure trust fund – he’s proposed with several other congressmen – to look at large projects like multi-state rail corridors, and float the bonds and support the projects.

Discussion on currency and China – believes that ultimately more investment will flow to India and other countries that are more transparent than China.

watch out for falling letters….UPDATE: and we’re done. Now you know what I do on a Saturday night when I can’t be at Podcamp Boston :-(. 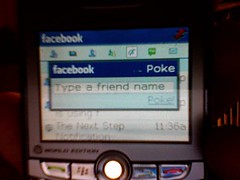