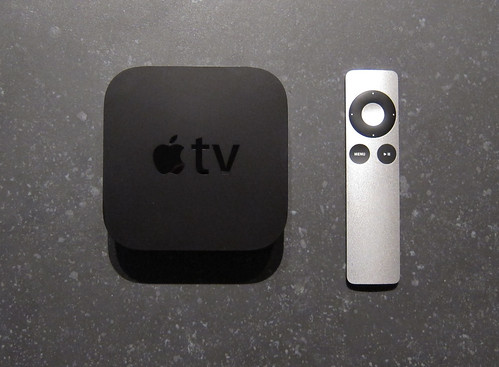 On September 9th, Apple will have a big event in California. Everyone’s expecting a larger iPhone and people are laying good odds on an ‘iWatch’ to be released or at least teased.

I’m going to go out on a limb here, buck the trend, and say that Tim Cook has one more “One More Thing…” to throw into the mix.

What if Apple is also releasing a new Apple TV type device? Something that’s not just a helper, but more of a “home server” type device (but Apple would never call it that).

2. Back at the end of 2012 Tim Cook talked with Brian Williams on NBC and talked about an “Apple TV.” He said,

TRACK 13
But will the next great thing be Apple’s long-rumored move … into the television business?

BRIAN WILLIAMS:
What can Apple do for television watching? What do you know that is gonna change the game, that we don’t know yet?

TIM COOK:
It’s a market that we see, that has been left behind. You know, I used to watch “The Jetsons” as a kid.

COOK:
I love “The Jetsons.”

BRIAN WILLIAMS:
I was right there with Elroy.

TIM COOK:
We’re living “The Jetsons” with this.

BRIAN WILLIAMS:
Facetime is “The Jetsons” but television is still television.

COOK:
It’s an area of intense interest. I can’t say more than that. But …Read more at http://www.cultofmac.com/204907/tim-cooks-interview-with-nbc-rock-centers-brian-williams/#oYLvb7rbpcdhQdeC.99

Ok. Given those two pieces of the puzzle, let me throw out the following.

People have lots of “Stuf” on their phones and tablets – photos, videos, etc. Right now, Apple TV allows you to project it via AirPlay. But people are running out of storage. Sure they can “save it to iCloud” (current challenges aside). They can sync with a PC or a Mac – but then the files tend to get “lost” or they’re less accessible.
What if a “Home Server” could store this material, easily take it from the phone or put it back, and also back it up to a (more secure, one hopes) iCloud with lots of storage space. That kind of thing is somewhat available now in “Time Capsule” as a backup for your computer. But what backs up your phone and tablet?
We already know Apple has a Content Delivery Network (CDN). Sure they’re doing more streaming, they bought Beats and they sell and rent lots of movies. But what if they are also going to store your stuff and get it back to you as quickly as possible?
They have a CDN so they want to provide more content. They have content deals. They have your content from your phone and tablet – music, photos, videos, etc. Why not make it easier to get, see and share?
This is pure speculation. I have no insider info on this. It just makes sense to me that they want more TV real-estate and they want to keep you in their ecosystem.
We’ll see. But if I’m right, I get to do a “Told-ya-so” dance. If I’m wrong, I’ll just keep saving stuff to dropbox.