Oz Sultan is taking notes on paper next to me and helping me crib. Thanks, Oz! 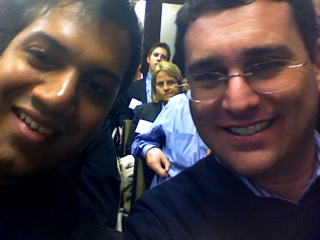 Swoot – Glenn Pennock
From outside Amsterdam: Swoot takes content out of the browser and puts it on desktop, mobile, tv, every medium. One time download plug-in. Competition -no one and everyone…

Everyone will benefit from their stuff – advertisers, social networks, people. Open Source license, everyone can use it, intent that “his secretary could build something in 10 minutes with no training.”

Right now, they have lots of kids using an app from Jetix, which is a Disney property. Showing woody woodpecker, coke, etc.
Kirby asks about revenue model – Commercial license, non commercial use is free. Sell brand installers to resellers. Develops clients (big one in Germany) that has built an environment for Classical Music lovers. THey have 1MM+ users. In 6 months, 10MM users projected.
Smart meta-data profiling system they have – a tool set.

Shelly asks – isn’t there a tough time making Swoot content – flash developers are tough to find.
Glenn answers, much of this is HTML, much is easy. We have found a large group of folks all over the world that can create good content. He mentions that 3K would be all that the Bad Boy records group would have to pay – it’s not so tough to make.

Art can’t figure out if he’s a distribution platform or an Application service provider, and it also appears to be custom development – can’t tell what he’s looking at – world domination, or an amalgam of tricks hidden behind custom programming – Is this a distribution network or an application services provider.
Glenn – Both – they have a tool set – drag and drop editor – anyone can make it – a server side application, and you’re in control at the back.
Art – Client licenses it separately? Glenn – yes – everything is on the server – content
Pushing out content as a new experience .

Abby – Who is the “you” you’re referring to – who are you serving? End user or the advertisers as your clients?
He wants to change world of push-pull, but she feels he’s mashing those terms together.
GLenn:
The “You” is not the end user – he believes the content creators/advertisers know the users better than him. He will support the platform.

The general feeling from people I’m sitting with is that he hasn’t really clearly explained what he has and his business model.
Now showing a Jimi Hendrix desktop with bar and widgets – with advertisers.

Oz tells me there’s more to it than he’s explaining here, but I can’t see the difference between this and regular desktop widget technology. Apparently – content can be mobile, can be anywhere, etc.

Shelly – asks who gives you right to do things to people’s desktop and ads after I’ve installed it? Once I have a coke icon, can it become a Lego?
Audience question: Spyware concerns? – no

Abby – if you don’t keep consumer in mind you’re going to have an issue.

Art – question of who your customer is will be an issue. Trust consumer has in adopting it.

eSessions – Gina Fant-Saez
Allows you to find world-class artists (musicians) and connect with them to hire them for a project. Can work with many kinds of audio software as well to move files around.
Collaboration and repository place for creation and project mgmt of content.
Releasing a plug-in for real time collaboration. Musicians are a target market.
Reduces expenses associated with traditional music creation sessions.

Privately funded by Gina and brother – looking for future investments.

Answer – they built in functionality, but the union didn’t follow through so they are waiting.

Art: What’s your addressable market, and how big is it?

Answer: Not just record making – but anyone who’s associated with music creation.

Art – You’re competing with anyone who lets you store a file
Answer – No, there’s more than that. They have 6000 clients signed up because of their potential.

[Side comment – People, turn your cell phones to vibrate. It sounds like a ringtone store in here…]
Answer: Last month – about 20k worth of talent work, they got 15% of that. They aren’t charging for disk space now, because it’s a beta but they would have make money on that.

Abby – You glossed over competitors. It implies what makes you special is quality of your database – what keeps that talent from going to many other sites too?

Answer – With esession model – they get 50% upfront, and clients have to pay to get final version of files so artist gets payments quickly.

The collaboration features seem to be the biggest and most interested.
question from audience – how will you get paid if people do the actual music outside the system, and do the financial part outside the system.
Answer: They’re not asking people to be exclusive – but the core value will be in helping the project get done…

Q from Audience – are you helping independent musicians get more work and more access to musicians?

talking about other licensing uses and monthly subscription levels as well.

I’m losing the thread on this a little bit.
Kirby – asking if this is too narrow a niche.

Shelly – in love with this platform.

Collects live radio and TV, index wods spoken, news and infotainment focus,
Demo of the product – find it, clip it, and share it.

Let you put in key words, and search up to two weeks back, search by date, range of hours, find the file you want, bring you to point in video where what you searched for is being said. You can then make a clip of up to 10 minutes, clip and title it, they have meta-data behind it. Once you clip it you can watch it, and you can also look at the closed caption. Then you can share it, send link to a friend, email to many people, or embed it into your own site.
Vision – one location to aggregate content instead of 50. Allow bloggers to find it and share with others.
They’re working with sports teams to embed stories into their sites. Working with broadcasters to make some trials.

No one does exactly what Red Lasso is doing. This allows bloggers to use exactly what they want. Model is ad model, revenue share, hockey stick curve of users, of course.
3 way share – distributor gets a piece, publisher gets biggest piece, they get a piece for enabling the technology.

Shelly – QUestion – ad supported – if this is going to work, this has to have a TV model of 35% ad time.
Answer – THey’re looking for different areas – they can do contextual ads next to or overlay, they know where it’s playing to target even further. CMP for Pre-roll is 25$/thousand. They believe they can get 7-8$/thousand for contextual

Art – How does this solve copyright issues?
Answer – WHen video gets played on you-tube -they claim don’t know what’s been played. With their system, they know what’s been played – and they’re working and talking with broadcasters and are in negotiation to share revenue so allowing a license for doing in this.

THey aren’ interested in music rights or entertainment shows. Their focus is on news and infotainment and ‘fair use’ type content. they believe it’s a new channel.
Cap ex – minimal – generic servers and storage. 20k a month. After 2 weeks, dispose of content, but maintain the clips. Focus is on extending life of content and generating ads each time it’s used.

Discussion of how much storage, how many channels, how many clips, cost etc.

I think they’re missing some of the challenges here – with long tail, many people will want lots of clips, they may end up saving and storing everything.

Kirby – likes business model – they’re focused on who their model is – but he feels that the amount of data that has to be stored and value is in having a LOT of data over a LONG period of time.

Answer – believes much of this data will be already clipped by other users and therefore will be stored over time.

Though there’s some challenges, this one intrigues me more than the previous two companies.

They believe they need between 10 and 15MM to move forward. Spend it on infrastructure, search experience, etc.

One challenge I haven’t heard here – they’re really competing with the networks themselves, as I hear all the networks working with companies like FAST to index their own content. (Note I learned this when I did some work for FAST at an event).

Google won’t do this – they’ve been trying to speak w/ broadcasters about this and have been put out.

Ok, I gotta run. This is almost over, but I’ll have to hear the end later…