Tristan Louis asks “Who Were You on September 10th, 2001?” It is a deep and profound question. How does one find ones’ prior self? How can one track the course of a life?
I found a little about the old me on my old, old weblog. In August of 2001, I was quite focused on the streaming media industry. I wrote a piece called “Radio, Radio,” in deference to the Elvis Costello song of the same name. At the time I was quite concerned about how some government rulings might kill Internet Radio (and I was right to be concerned).
Apparently, that August was a busy month – I didn’t blog again. I remember that we were focused on landing some clients at Sorceron. (RIP, Sorceron, no url anymore). We almost got Lehman Bros., too. But then their HQ got blown up on 9/11 along with one hope for the company’s funding and product set. The old me had been pretty annoyed at Sorceron, and had been looking for a new job or a way out. The way out came in October of ’02 when I was let go.
The double-whammy of having witnessed the fall of the Towers from a scant mile away and having lost a job was definitely life-changing. I spent some time with a career counselor wondering what I would do next. I realized that giving back to the community was a priority for me and just the next week I was interviewed and then hired to work at the Twin Towers Fund. The connection was a coincidence of meeting someone at a party who knew of a position, but I was wide open to a way to help in the 9-11 efforts and it was like fate dropped it into my lap.
Today, September 10th, 2003, I watched as our board of directors voted to close the Fund, and I looked back at what we accomplished.
In less than two years I led the operations of an effort that distributed in total about $165 Million out of 216 Million dollars (some had been distributed before I was hired). We gave this money to 545 different households, across the tri-state area and throughout the United States. Each household was called before each distribution by a member of the staff to confirm the delivery date for every one of the over 1,625 packages sent. Each package was tracked and logged. The Staff of 7 (shrinking to 5 then 4) was able to accomplish 95% of each funds distribution in 2 weeks. The final distribution reached over 90% of funds distributed in just one week.
Those tangible accomplishments are accompanied in my mind by the friends I made among those 545 households of fallen rescue workers, and the knowledge that even in the places where I was just a voice calling to confirm a check, I helped provide financial security and programs for these brave families.
I never thought on 9/11/2001 I’d get a chance to work for this man. 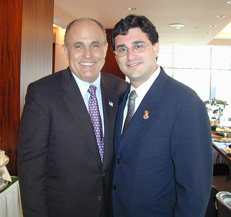 I was forced to bring together skills from all my previous jobs. The 7 of us had lots of outside help, but we did events, marketing, project management, accounting, budgeting, computer support, envelope stuffing, party planning, audits and shut down a charity according to a very difficult NY State code. I learned Leadership, with the capital L, from a man who worked for the man who wrote the book on it. I learned fundraising, strong-arming for free stuff, budgeting, accounting, guessing, seat-pants-flying and more. I learned strength from people who had spoken at five funerals a week and still went to work the next day and the next day.
I learned bravery from guys I never met, who were more than pictures on walls, names on flags or plaques or memorials or database entries. I took strength from the men and women who ran into two burning, shifting, dying buildings in order to save others.
I’ve emerged a stronger and more pragmatic person in the process. “Crisis” at work? Could be worse- I could have been working at 1 WTC on September 11th, 2001. Gives me a sense of perspective. Any day I get to go home at the end is better than that day for thousands of people. Kiss the kids every night. Tell the wife “I love you” and never, ever go to bed angry. Carry a flashlight on my keychain and an extra cell battery in my backpack, sometimes even an extra cell phone.
I watch the way my country has changed – it has become isolationist, grown more prejudiced and less trusting. By increasing security, we seem to generate more fear and unrest.
Some aspects are justified – some things we should have been doing. But in fundemental ways which I can’t fully enumerate, we’ve done more to hurt ourselves than the terrorists did to us.
I hope I can look back next year at this time and contemplate what I’ve done to make this better. My contributions at Correspondences.org are a start. Intelligent discourse and debate are the cornerstones of a free society, and contributing to such is a contribution to the community and the world. So thank you to Tristan for asking the question. I’ve answered it for me, just by taking the time to think about it.